This Week in Weather

Tests confirm GOES-T is prepared for the harsh conditions of launch and orbiting 22,236 miles above Earth.

Learn how to access, analyze, and visualize GOES-R Series data.

What are the Different Types of Clouds?

Clouds are often one of the first things we notice when we look up into the sky. Learn more about different types of clouds and how they can help us predict the weather.

The satellite is undergoing a set of rigorous tests to ensure it can withstand the harsh conditions of launch and orbit.

Why Does the Wind Blow ?

Wind is a part of weather that we’ve all experienced at one time or another. And whether it’s a welcome breeze on a hot day, or a destructive gust during a storm, it all starts in the same way: differences in air pressure. What is the GOES-R Series?

The Geostationary Operational Environmental Satellite (GOES) – R Series is the nation’s most advanced fleet of geostationary weather satellites. The GOES-R Series significantly improves the detection and observation of environmental phenomena that directly affect public safety, protection of property and our nation’s economic health and prosperity.

The GOES-R Series is a four-satellite program (GOES-R/S/T/U) that will extend the availability of the operational GOES satellite system through 2036.

Why the GOES-R Series?

DCS is a satellite relay system used to collect information from Earth-based data collection platforms that transmit in-situ environmental sensor data from more than 20,000 platforms across the hemisphere.

The SARSAT system detects and locates mariners, aviators and other recreational users in distress. The GOES-R Series continues the legacy function of the SARSAT system on board NOAA’s GOES satellites. This system uses a network of satellites to quickly detect and locate signals from emergency beacons onboard aircraft, vessels and from handheld personal locator beacons. The GOES-R Series SARSAT transponder operates with a lower uplink power than the current system (32 bBm), enabling GOES-R Series satellites to detect weaker beacon signals. Explore the GOES-R Series spacecraft: Use the quick view buttons above to swap the views of the spacecraft, launch the spacecraft 3d model using the button below, watch the video below and use the Spacecraft & Instruments links below.

A fly by in space of GOES-R. Note: there is no audio, therefore no closed captions.

The most recent images of Earth's western hemisphere from the GOES constellation. 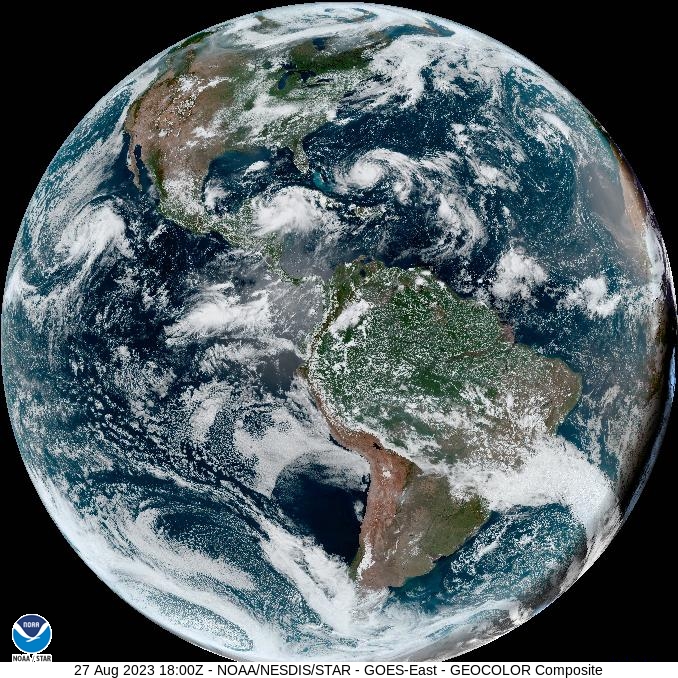 Environmental satellites provide data in several different formats. The most commonly used channels on weather satellites are the visible, infrared, and water vapor.

Visible satellite images, which look like black and white photographs, are derived from the satellite’s signals. Clouds usually appear white, while land and water surfaces appear in shades of gray or black. The visible channel reflects solar radiation. Clouds, the Earth's atmosphere, and the Earth's surface all absorb and reflect incoming solar radiation. Since visible imagery is produced by reflected sunlight (radiation), it is only available during daylight.

In the infrared (IR) channel, the satellite senses energy as heat. The Earth’s surface absorbs about half of the incoming solar energy. Clouds and the atmosphere absorb a much smaller amount. The Earth’s surface, clouds, and the atmosphere then re-emit part of this absorbed solar energy as heat. The infrared channel senses this re-emitted radiation. Infrared imagery is useful for determining cloud features both at day and night.

Polar-orbiting satellites make regular orbits around the Earth’s poles from about 833 km (517 miles) above the Earth’s surface. The Earth constantly rotates counterclockwise underneath the path of the satellite, making for a different view with each orbit. Information from polar-orbiting satellites is used for mid-range (3-7 day) forecasts and advanced warnings of severe weather.

Since 1975, GOES have provided continuous imagery and data on atmospheric conditions and solar activity (space weather). They have even aided in search and rescue of people in distress. GOES data products have led to more accurate and timely weather forecasts and better understanding of long-term climate conditions. NASA builds and launches the satellites and NOAA operates them. 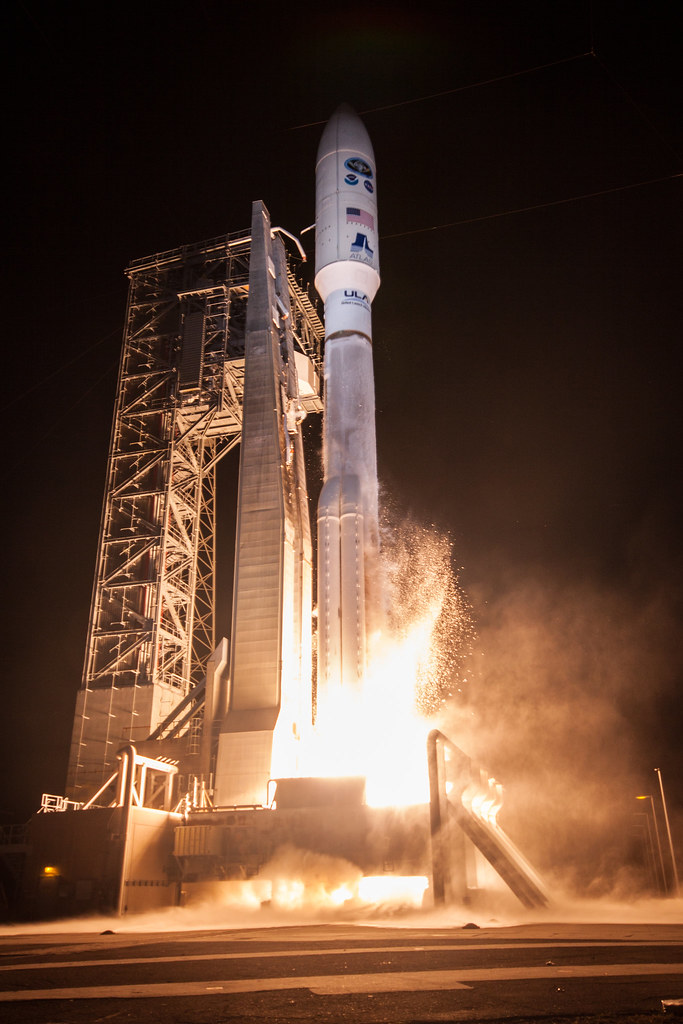 GOES-S, the second satellite in the GOES-R Series, launched on March 1, 2018, at 5:02 p.m. EST at the opening of the two-hour launch window. GOES-S launched from Space Launch Complex 41 at Cape Canaveral Air Force Station, Florida, aboard an Atlas V 541 rocket. The satellite was renamed GOES-17 when it reached geostationary orbit on March 12, 2018.

GOES satellites are placed into a geosynchronous orbit that keeps them over a specific location on the earth. By maintaining a position hovering over a fixed point on Earth's surface, GOES are able to constantly monitor atmospheric conditions in a particular portion of the Earth's atmosphere. Note that non-geosynchronous orbits (for example polar orbits) move over an ever-rotating earth underneath them, therefore seeing a constantly changing view, which has advantages for other types of missions. GOES-16 became operational as NOAA’s GOES East on December 18, 2017, replacing GOES-13. From its operational location of 75.2 degrees west longitude, GOES-16 is keeping watch over most of North America, including the continental United States and Mexico, as well as Central and South America, the Caribbean, and the Atlantic Ocean to the west coast of Africa.

GOES-17 replaced GOES-15 as NOAA’s operational GOES West satellite on February 12, 2019. From its operational location of 137.2 degrees west longitude, GOES West is in position to watch over the western continental United States, Alaska, Hawaii, and the Pacific Ocean all the way to New Zealand.

NOAA powered off GOES-15 on March 2, 2020 and placed it into orbital storage. Since late 2018, GOES-15 has operated in tandem with its advanced, newly launched replacement, GOES-17, as a precaution, while engineers worked on technical issues with the loop heat pipe of the Advanced Baseline Imager (ABI), the primary instrument on the satellite. A blockage in the pipe prevented the ABI from cooling properly and hindered its ability to collect data during certain periods and hours of the year. Engineers mitigated the issue through operational changes to the ABI and mission operations, including the use of Artificial Intelligence techniques, to regain capability to collect data during a portion of the affected period. Those efforts have resulted in the GOES-17 ABI delivering 98 percent of expected data. NOAA plans to return the GOES-15 imager to temporary service during the peak period for Eastern Pacific tropical cyclones, around August 2020.